Previously, the smartphones were to be released in only standard color options, But now, the smartphone manufacturers are now experimenting with different colors and want to reveal the phone is various finishes. Just like LG has recently announced its latest flagship LG G6 smartphone with high-end specs and impressive features along with white, black, and platinum color options. Samsung has also launched Galaxy S8 smartphone in five color options. But the Chinese company Xiaomi breaks the record by launching its device in 11 colors, can you imagine it, 11 different colors, you can pick your favorite one. At VogaTech, also read about the Xiaomi Redmi 4A budget friendly smart phone. 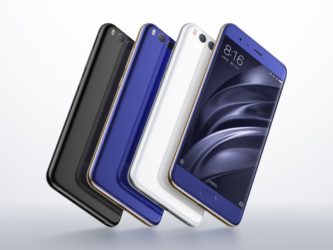 When the Xiaomi Mi 6 smartphone has officially launched, the company revealed only four colors: Black, white, Blue, and silver. But now, the TENNA certification site has just revealed the detail about the smartphone, that it will available in 11 different color options, the additional color included, Gold, Gray, Drak Gray, Pink, Champagne Gold, Frosted Black, and Cherry blossom. Unfortunately, these additional color variants are exclusively available only in China, while in the other countries the only four colors are available, which company has unveiled with the official announcement of the phone (Black, white, Blue, and silver).

Moreover, the company has also announced a special color variant of the smartphone, called Ceramic. The Ceramic edition will come with a four sided curved body, and camera rims made out of 18-karat gold.

As far as the specs are concerned, the smartphone features a 5.15 inch display with 1080 pixel resolution and powered by the Qualcomm Snapdragon 835 octa-core processor clocked at 2.45GHz. For the graphics, it packs Adreno 540 GPU, and 6GB of high speed RAM. The smartphone is backed with 128GB of storage, and having a dual 12 megapixel rear camera, while on the front, there is an 8 megapixel front facing camera for capturing selfies. The phone boasts a 3,350mAh battery and has USB type-C port for charging.