Kobo – the Canadian e-reader manufacturer company has recently announced a new version of the Kobo Aura H20, an affordable and upgrade version of the e-reader. The impressive feature is that, it is now water-resistant, so you can read on sea side. Originally, this e-reader launched in 2014 and was not waterproof and did not carry high-end features. But this time the company upgrades it with a number of advance features. 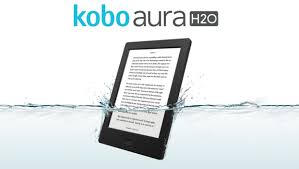 The new upgraded e-reader features a massive 6.88 inch display with 265 ppi E Ink screen. The screen features a new lightning technology, with this technology you also can read easily while in bed. The e-reader can also detect the time of reading in whole day and adjust screen brightness and temperature which is best for your eyes, thanks to its ComfortLight Pro feature.

As I mentioned above that it is water proof, it is rated IPX8 water resistant, that mean you can submerged the new e-reader in two meters of water for up to an hour of time. For the processor, it packs a Freescale Sololite processor and coupled with 512MB of RAM.

To power the e-reader, there is a 1,5000mAh battery buried inside that last up to a few weeks just from a single charge. The Kobo Aura H20 comes with the support for different languages, including English, German, French, Dutch, Spanish, Japanese, Italian, Portuguese, and more.